Posted on September 21, 2013 by ashleylauren 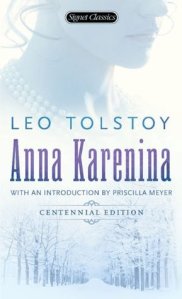 With the recent hype of the Anna Karenina movie, I decided it was time to tackle the tome that is Tolstoy – it’s my first real encounter with Tolstoy and I figured this would be the best place to start. After all, I’ve enjoyed many other classic romance novels and Anna tends to fall in among other names like Elizabeth Bennett, Jane Eyre, etc.

One of the biggest complaints I have heard is the inability to keep the characters straight with all those crazy Russian names all over the place. I had no trouble though. No, I side on with the other popular complaint – the damn length. I was so close to liking it, I really was, but there was just so much in-between mucking it all up.

I don’t need to go on and on, Tolstoy has that covered, let me just put it like this.

According to my nook version I read, this story was 1157 nook pages. I legitimately enjoyed 500 of those. Those 500 or so pages were impressive, Interesting, page turning, and heart-poundingly wonderful.

The rest? Well… okay, how about this. Do you know when you’re with a group of people and half of them know each other from somewhere you’re unfamiliar with? Like, maybe they were all in a class together that you weren’t in? Then they start telling stories about people you don’t know? So, of course, you listen because you’re not a rude person, and the stories are kind of interesting, or funny, or whatever but since you don’t actually know the people you’re missing some kind of crucial element to make the experience actually enjoyable.

So is it worth you time? If you’re willing to skim, I think so. The story and premise itself is great, it’s just Tolstoy likes his world and he wanted to say a lot about it. It was also written during a time when making a political point in a novel was normal. Hooray for reading it now.

Last night I watched the newest version of Anna Karenina and was pleasantly surprised, for the most part I think they did a great job… until the end. I won’t spoil anything but I feel as though they just missed the mark on who Anna is overall and, especially, why she does what she does at the end. I think the movie implies her motives are out of jealousy when I think it’s more of a realization that she’s wholly and utterly trapped- mostly by herself.

So – all the hours spent reading the book, and the hours I spent watching the movie and I still come back with a shrug and a meh.

Well, at least I know someone cares.