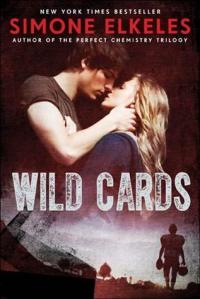 I’m just not going to argue with a book I read so fast. Whenever a book makes me flip page after page after page, it has something going for it. That’s how I have been with everything Elkeles has written. When I go back through and analyze afterwards I can usually identify things that bother me, that I wish were different. But I’m not going to ignore the fact that in the moment I was there and loving it. That’s what I really want in a book in the long run.

So, we have Derek and Ashtyn. Don’t be fooled – this isn’t a book about plot. Yes, there is one, since you need one in a book but that’s not what this is about. It’s about these two characters and how they fall in love. There’s no suspense or question that this will be how them book ends. Derek and Ashtyn are going to be together and we’re just reading a book on how that happens. If you want some kind of suspense about that when you read a book then this is not for you.

Elkeles does a really good job of making these two characters exist in real life. They have plenty of their own baggage and they are definitely teenagers. This is one of those books where the characters act their age. They are young, hormonal teenagers and because of this they sometimes do stupid things. You can see them learning and faltering along the way and as a reader you can’t help rooting for them. You want them to figure out their life because you hope if they can, then maybe you can, too.

Okay, that might have just been me. What I’m saying is that it’s easy to connect.

There were two things that bothered me about the story.

1) Ashtyn’s main character flaw. She projects herself as such a strong, independent young woman, a football player who, despite living with her father seems to have raised herself. For all of that, though, she can’t seems to handle herself and it’s bothersome. I wanted her to figure out about Landon on her own. For all the time she spent around guys I just don’t see how she or even her guy friends would have let her be with someone so negative to her life. I don’t see why Derek had to point out as many of these things to her as he did. I wanted her to do more on her own – but it wasn’t a deal-breaker on how I liked then.

2) Derek’s grandmother lives in Texas and the football clinic is in Texas and miraculously they are located withing CABBING distance? Texas is huge – what were the chances of them being in the same exact place?!

I’m kidding about that last point – kind of.

If you love cute, fun, YA RomCom, you’ll love this. That’s all you need to know.