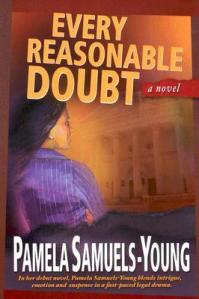 There are a lot of things about this book I really liked. Good writing, interesting plot, good pace, strong characters; there is a lot to love. I really enjoyed the dynamic of the law that you need in this kind of thriller paired with the social dimensions of race and relationships. Overall, really well done.

So – why only three stars? There are two things about this story that drove me nuts and I just couldn’t get over. In many ways, they ruined it for me. It’s not stopping me from starting book two, but if book two rubs me the same, I won’t be continuing from there.

Now that I’ve created suspense, here are the two catastrophic issues I had with this novel.

1) Shoddy Investigation: Obviously, a big draw of a legal thriller is an interesting crime and a good investigation, especially when the capabilities of the attorney are so hyped. Seriously though, the details of this crime were SO poorly done. I have no background in any form of investigation and I can poke holes in a ton of this. For example (no spoilers here, no worries). This murder was supposedly committed by a tiny, weak woman and NO ONE asked how it was possible that the man didn’t/couldn’t defend himself. Excuse me? Then there’s the question of blood on the main suspect’s clothes – it finally came up at the very end of the book but it was the lamest after-thought ever. She changed clothes and NO ONE noticed? I don’t care how similar the dresses were- people at a social charity event know if you went and changed your dress. It’s ridiculous, and those were just two obvious things. Maybe I’m off the mark since, like I said, I don’t have that background, but it was bothersome.

2) A Whiny Little Prick of a Husband: This is 100% purely personal opinion here so take it with a grain of salt. I loathe Jefferson. Seriously. What an ass! Look, I get it. I love my husband to death and I hate it when he or I get busy at work and cannot see each other. But do I guilt trip him every five seconds that I see him? NO. Does he make me feel terrible when I work late? Absolutely NOT. When one of us has to ramp up and do more we support each other. I recognize when my husband is stressed and working his butt off and I help him through it. Jefferson did the opposite and look, I get to a certain extent the frustration, but the lack of support he provided to his wife was unreal. And the book made it seem like the main character, the wife, was the one at fault. I saw absolutely nothing in the Jefferson character that showed me how he supported her at all. He knew darn well when he married her that she was a lawyer and to sing a new tune just when she’s hitting it big is just a dick move. It was infuriating and a very main part of the plot.

So! Unfortunately, despite a lot of really positive things with this novel and author, those glaring pieces of the plot really sucked the enjoyment out of the novel for me. I’m hoping for an improvement moving forward!