Posts Tagged With: outwitting the gestapo

Book Review: Outwitting the Gestapo by Lucie Aubrac – 3 of 5

Outwitting the Gestapo by Lucie Aubrac 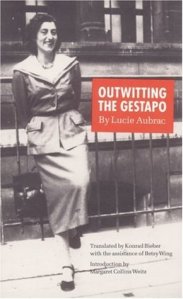 Germans on my doorstep? Whatever, I’ll just lie to their face.

Nazis capture my (Jewish) husband? NBD, I’ll just march up to Klaus Barbie and give him a piece of my mind.

Pregnant? Psh, I’ll go on raids and rescue missions until I start having labor pains.

Seriously, there’s a book (and I guess, a movie) about Lucie Aubrac (aka: Catherine, Lucie Bernard, Lucie Samuels, etc) for good reason. She did some incredible things as part of the Resistance in France in WWII. Add on top of it that this diary-style book captures the nine months of her pregnancy – when her husband is captured and she helps mastermind his rescue – and you have one hell of a story.

So why only three stars? Unfortunately, this book is a prime example of how poor writing can turn something as exciting as Lucie Aubrac’s life into a history book. I don’t know if Lucie’s writing style was a bit silted or (what I think is more likely) the translation was poor. Excitement comes across as corny and all of the events are discordant and often confusing. Everything felt like it was in fast forward. Before the emotions of fear or anxiety or hope could squeeze in the action had already changed. I ended up skimmed much of the end of the book.

I’m pretty die-hard when it comes to WWII memoirs – if you’re that way too, you may find this enjoyable. If not, I wouldn’t recommend picking it up. I think ti’s important to know who Lucie Aubrac is – do a little research – but, unfortunately, her memoir falls flat.