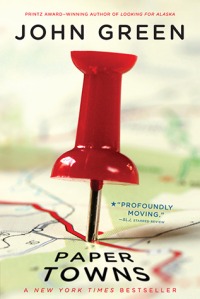 John Green is some kind of word magician. Or plot sorcerer. Or character wizard. I don’t know what exactly, but the point is that Green is filled with glitter and rainbows and confetti magic.

I devoured this book in less than a day. When I closed the final page I just gave one nod and said, “Nailed it.” Green knows exactly what he is doing in all his stories.

When a book is truly 5 stars I don’t feel like my reviews are needed. What’s there to say? Go read this book is pretty much sufficient. But, still, I suppose I can relay a little of what makes this beautiful.

I have never seen a better trio of boy friends. Q, Radar, and Ben are fantastic. Green’s dialogue is perfect. You can see each person, you can understand who they are, and, even better, you can understand why the three of them are friends. That’s a lot to know about people who aren’t the main stars in a relatively short book.

Then, of course, there’s Margo. Probably the only thing that is a stretch is the relationship between her and Q – it’s too stale in their history for it to start being friendly again now, but I’ll take it. Regardless, I love all the different ways we see her and the influence she can have on people.

There’s life lessons galore but there’s so much to giggle at as well. Such a wonderful book.

Daughter of Smoke & Bone by Laini Taylor
My rating: 4 of 5 stars

It may be possible that these are the prettiest YA series covers ever. Srsly.

To those of you who pick up this book – I recommend you buy/borrow the other two from the trilogy at the same time. You’re going to want to read them all in quick succession.

I love this series’s imagination, the colors, the scenes. It’s all so beautiful. The setting is incredible – Prague, the art studio, Poison. Even better are the people! Humans, angels, and creatures – they are all fascinating. Taylor does such a great job of showing me everything without overloading me with exposition. I can see so much, and I don’t even think that’s because I’ve traveled to many of the places (Prague and Marrakesh being two main settings – gorgeous on paper and in real life!).

Then there’s a plot. It has the scary angels which fascinate me (quick plug for how awesome Angelfall is) along with just as fascinating underworld beings. I love the way you’re not sure who is good and who is bad. The action is intense on both a large and a small scale.

Book one, for me, was an obvious 5 out of 5 – hit it out of the park kind of style.  But, with the curse of most trilogies (in my opinion), the second and third books get too weighty.  The second book doesn’t move nearly quick enough and the super bad-a** main character (necessarily) stumbles and whines and moans a bit. I get that Karou was going through hardship, but it’s just not fun as a reader to see how long it takes her to see what is right in front of her face.

Book two ramps up at the end and by the time you make it through book three, you’ll feel all weepy for not seeing more of the characters (at least I did) – Zuzana, Mik, Liraz, Hazael, Issa, Ziri, and, of course, Karou and Akiva. I loved them all, particularly the humans, throughout the whole process. The fighting, the plotting, it was all so beautifully done. I love how little right and wrong there is (did I say that already?  Well, it’s true). Every once in a while you get your certainty for who is inherent good or evil, but I love how the idea of angels and demons just doesn’t hold up. It’s a beautiful message, all and all.

The book should have ended at the end of the battle, when we know who won. Truly. It did not need to go on into this whole other plot. I’m not sure where Taylor was taking all of that – there were too many new ideas (and characters, for that matter) introduced in the final book. I think it was all one giant plot line that wasn’t needed. I think the core plot was perfect on its own.

Even though I have a few qualms, I loved the trilogy. Per usual, book one was the best and one I ate up quickly, but the other two well supported it all. Definitely a great YA series to pick up!

Series Review: Angelfall and World After by Susan Ee – 4 of 5

Angelfall and World After by Susan Ee

My first instinct upon completing these books?

When I am reading a story I need one of two things for it to be something I like – I either need great characters with excellent development, or a kick-butt plot line. Obviously, if I can get both, I’m in love.

Ee just wows me. It’s not a writing marvel and it’s not a masterpiece but I can’t help loving this. It’s hard to explain why I enjoy reading these books so much. I think I just admire Ee’s risk taking. Honestly, she’s balls to the wall with this stuff. Descriptions are bare minimum, exposition is to the wind, this book is a learn as you go – and it’s going to go fast. I find myself filling in the gaps of what’s happening. Ee is constantly surprising me. Sure, like every ya novel with a female protagonist you get some predictable items but in the long run I just want to give Ee a hearty thumbs up. This book had a ton of “What the H?!” moments that make me all antsy in my chair. It’s well designed and even though some of the character development was a little shallow, I enjoyed it all the same. The Angelfall series, for me, is about the plot line. It was interesting, unique, and it was quick.

I realize that’s a terrible review that tells you nothing, but I’m sticking to it. Pleasantly surprised. If YA fantasy is your style, pick it up! And if you enjoy Angelfall, then World After will not disappoint. Penryn is still a BA and the world is still f’d up.

All I have to say is brace yourself for the ending to both of these books.  You’ll never see it coming.

Not sure when the next in the series is coming – but I’m looking forward to it!

Siege and Storm by Leigh Bardugo

Hold onto your hats, folks, because I’m about to blow your mind. Are you ready for this? I just finished book two and it was better than the first.

Seriously, that never happens. At least not when it comes to young adult books lately – especially young adult trilogies (I’m assuming this is a trilogy… I could be wrong, but pretty sure I’m not.)

Honestly, I really liked this one. It was reckless and interesting and the plot moved forward at a really good pace. The danger stepped up from the first one and the stakes got so much higher. But that’s not what made it better. No, it was the characters. I don’t know how Bardugo did it but the fact is I don’t trust anyone. No one. Not Mal, not Tamar, not Tolya, not Genya, not Baghra, not Zoya, not Sturmhond, not the Darkling (duh), and especially not Alina.

As always, I had my moments of scoffing (I mean, come on, the un-healable injury in the shoulder that hurts when the enemy is near? No one thought that was just a little too Frodo Baggins?) but overall I really like this story.

In my review of Shadow and Bone I ended it by saying that I was rooting for you Bardugo. And you pulled through! For that, I say thank you.

Man, this book was supposed to be a clincher! I had heard so many good things: “Jessica Darling is a great character,” “the people are hot, “her experiences are hot,” “it’s sooo much better than 50 Shades of Gray” – well, at least they got the last part right. Mostly because 50 Shades totally sucks.

Mmm, but yes, back on track. I just couldn’t get into this book. I’d blame it on me not actually being a young adult anymore, but I can’t even use that as an excuse. These characters are just annoying. Maybe I didn’t have a normal high school experience, but were people really this dumb and catty in high school? Did anyone out there actually have all these groups with various names and stereotypes? Did I miss something here? Everything about this book is so cliche it’s sigh-worthy. And sigh I did, a lot, while reading.

So – Sloppy Firsts. Enter Jessica Darling: the entire book is a continuous spot light on this whiny teenager who “doesn’t have any friends” even though everyone seems to inherently like her. She’s the typical girl who claims to be unattractive because she is “too skinny” – oh, sure. She’s the girl who is so “totally awkward” but cracks out witty conversations all the time. She’s a young girl who has a talent for books and writing because – another heavy sigh on my part – the author can’t freaking come up with any other passion in life. Seriously, how many characters have to love writing and/or Jane Eyre/Jane Austen/Tolstoy/Insert Any Other Famously Good Novel Here in order to show they have hobbies and intellect? It’s old.

Obviously, I just couldn’t get into her. I’ll give props to McCafferty for doing a good job on depression, I think Jessica’s feelings there were very believable and well done. I know this review is going to sound like I hated it, but I didn’t. It had some gems of dialogue in there, though I never quite got the laugh. It’s the supposedly good and happy parts that are lame. Marcus is a useless love interest. I didn’t get him at all, or her attraction. Did McCafferty even describe him for us? I had no idea he was important until I had already missed everything. Not a good sign.

Plus, can we please talk about the lack of period piece? And how she’s totally not concerned? Or not enough? I mean – what?

Anyway, I checked out the second installment for the library because the book is not stand alone (a pet peeve of mine about series, but I’ll let it go). I doubt I’ll crack it open. I do want to give it a second chance because so many people love it but, for now, I’m just going to go with meh.